Published 12 December at 12:00AM, inCAREER INTERVIEWS 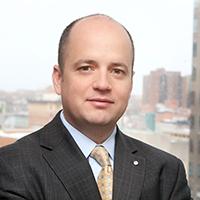 Nicolas Richard, who comes from a small town in the Mirabel region north of Montreal, earned his reputation in the finance industry through his work in some of the world’s largest financial hubs. In September 2016, he was promoted from Chief Investment Strategist to Vice-President, Investments and Chief Operating Officer at Desjardins Global Asset Management (DGIA).

Mr. Richard began his career at Citigroup, where he held a number of portfolio management, research and financial strategy positions in Geneva, London and New York. Prior to joining Desjardins in 2011, he was Managing Director at Morgan Stanley Smith Barney; as such, he was responsible for strategic asset allocation and a voting member on the firm’s investment committee.

Mr. Richard holds a bachelor’s degree in mathematics/actuarial science from Université de Montréal (1993) and a master’s degree in finance from the London Business School (2001). He is also a Chartered Financial Analyst (1998). 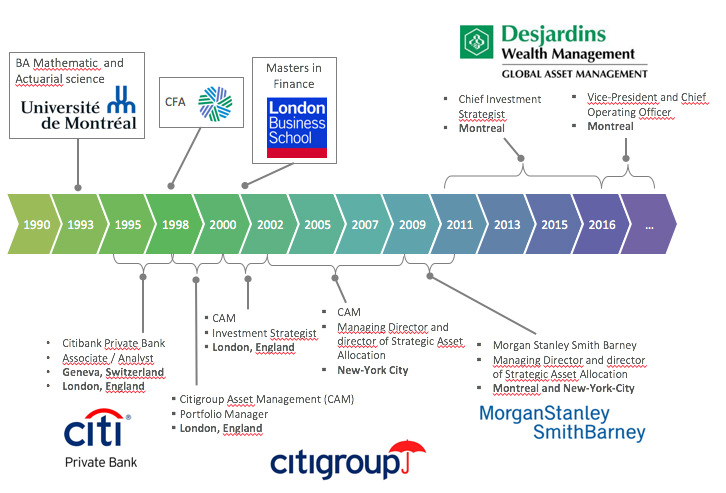 When did you begin your career, and what was your first job? Was it the position you were hoping for?

After completing my studies in actuarial science at Université de Montréal, I took a year off to travel and think about my next steps. I made a stop in Geneva, Switzerland, and ended up finding a job there. So it was somewhat by fluke that I began my career at Citibank Private Bank as a junior analyst. It was there that I developed an interest in portfolio management. The bank’s wide range of activities allowed me to transition towards this field, and I was able to gradually take on more responsibilities. But I never really set specific goals or objectives. Instead, I worked hard and was guided by my interests and the opportunities that came my way.

Did you follow a specific career plan? How often have you changed employers or jobs within the same firm? What was the main reason for those changes?

The path I’ve taken may appear linear, but I’ve never followed a specific career plan. Over the past 22 years, I’ve held a number of positions within the same organizations. At Citigroup, I went from junior analyst to managing director and director of strategic asset allocation. I also held the latter position at Morgan Stanley after the sale by Citigroup in 2009 of the wealth management division I worked for, Smith Barney. I returned to work in Montreal, but the job included travel almost every week between Montreal, New York and other cities.

It’s interesting to note that I was the only person working in portfolio management in the Morgan Stanley office in Montreal, as it was more of a technology and software development centre. When I arrived, the IT staff didn’t know what to make of me and wondered what I was doing there!

Then, in 2011, I was given the chance to fill a position at Desjardins Global Asset Management. It was ideally aligned to my profile, and it brought me back to my roots.

Tell us more about the position you currently hold. Did you encounter any major obstacles in your career path? What do you enjoy most about your job?

My current position is divided into two main roles. As Chief Operating Officer for DGIA, I manage the various asset management activities of Desjardins. As Vice-President, Investments, I also act as a content expert on financial markets and investments for the Group. Having the chance to work with such a talented team in a growing division are two aspects of the job that I particularly appreciate and enjoy.

The financial crisis of course triggered a lot of anxiety and many organizational changes within our community. One of the biggest obstacles I’ve had to overcome was the vulnerability of our functions amidst organizational changes that we often have little control over, particularly in large firms that focus primarily on short-term financial results. In investment, team stability and a focus on long-term results are vital conditions to success: fortunately, my current team has both. More recently, my transition to Desjardins also presented a few challenges: adapting to a different corporate culture and to French finance terminology, which I’d rarely used since the start of my career.

What skills do you believe someone needs in order to succeed in your area of expertise? What sort of impact has the CFA designation had on your career path?

Taking a step back, I feel it’s essential to adopt and maintain a strong belief in one’s approach as we navigate market cycles, regardless of what that approach might be. Often, meeting a consensus view may seem appealing and reassuring, particularly when our vision goes against the grain or when results are difficult over some periods of time. But as long as our analysis is based on a rigorous, proven process, the investment decisions made should reflect this process only and not any emotional or other considerations. That’s easier said than done. Next, the investment philosophy we’ve adopted demands teamwork. By drawing on the fruits of each and every person’s labor according to their expertise, it is possible to improve overall results, avoid duplication of tasks, and create a working environment that’s more collaborative and thus more stimulating.

The CFA program enabled me to learn things I had no exposure to during my actuarial studies. And because the designation was already fairly recognized in Europe, it also allowed me to show my employer how committed I was to building a career in the investment field. Today, I’m still impressed by how CFA Montreal successfully brings together the city’s financial community through its many high-profile events. Compared to London or New York, which also have CFA societies, Montreal stands out in its ability to mobilize people.

How do you view the career possibilities in your sector? What recommendations would you have for someone setting out in this field?

Having worked in financial hubs like London and New York, I can appreciate how Montreal represents a centre of excellence where expertise, skill and talent abound. The Montreal financial community has no reason to envy the world’s major markets; we’re just not nearly as big! There’s no question that Montreal will always offer exciting career opportunities, but we need to do more to develop new ones. That’s why I applaud the initiatives underway to encourage emerging managers.

If I were to offer advice to someone interested in working in the financial sector, I’d emphasize hard work. I’d also tell them to develop their own approach and follow their own career path rather than emulate someone else’s. I’ve heard the expression often throughout my career, and it still rings true today: “Think outside the box.”