Published 07 September at 12:00AM, inCAREER INTERVIEWS 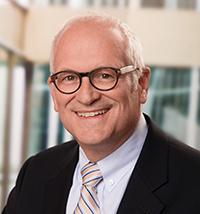 With over 30 years of professional experience, M. Tremblay is a prime example of how a career can evolve into different areas as long as one is true to their passion and interests. Over the last 14 years, Miville has been a Senior Representative of the Bank of Canada and a member of its Monetary Policy Review Committee and Financial System Review Committee. His main role is to liaise with the Quebec financial community, gather market intelligence and conduct research on various issues such as pension funds. In addition, Miville is Vice-Chair of the Accounting Standard Oversight Council. Prior to his current role, he worked for three years as the Director of Strategic Intelligence at Caisse de dépôt et placement du Québec. However, for the first 17 years of his career, he was a financial reporter for various media such as Radio-Canada and the Canadian Press, but mostly for La Presse. Earlier, he briefly lectured on Québec and Canadian politics at the State University of New York.

Miville holds a Bachelor’s degree in political science (International relations) from McGill University, a Master’s degree in Public policy analysis from Université Laval, an executive MBA from UQAM as well as the CFA designation. 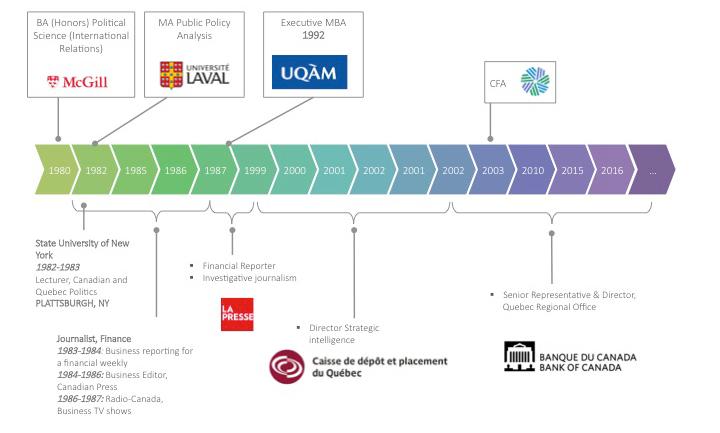 When did you start your career and what was your first job? Was it a job that you had targeted?

After completing my Master’s degree in public policy analysis I got a job as a journalist by chance. But I got immediately interested by the interaction between economic policy and capital markets. The job was a permanent learning experience where I got the opportunity to meet and interact with experts within those fields. Investigative journalism was something that I enjoyed immensely. I also discover that as a journalist I could have some influence over public opinion and even decision makers. So no, the job wasn’t targeted per say, but I stayed true to what interested me.

Did you respect your career plan? How many times have you changed employers or positions with the same employer? What was the primary reason for the change?

I never had a career plan. I was a journalist for the first 17 years of my career. However there came a time when I realized I was ready for a new challenge and luckily an opportunity presented itself:  Director of strategic intelligence at la Caisse.  A couple of years later, I was offered the chance to join the Bank of Canada. Over the last 14 years, my title has remained the same, but oh boy! with the financial crisis and its aftermath, with the extraordinary measures implemented by central banks, the actual work has been varied and very interesting.

In every career move, my primary driver has always been: Will it be interesting? Will I learn something new? So sometimes change in a career isn’t so much about having a plan, but more about the opportunities that one creates or recognizes when they occur.

Describe your current job. What do you like most about your current role? Were there any major obstacles that you had to overcome in order to follow your career path?

The biggest challenge I have faced during my career occurred as an investigative journalist. After uncovering a serious breakdown of corporate governance in a major financial institution, the CEO sued La Presse and me for libel for 21M$. I knew I was right in and wasn’t concerned, but going through that process, was nonetheless very gruelling, even if I won the trial at the end. Looking back, the skills I have acquired during my first job as an investigative journalist are still very much used in my current role.

What do you consider to be the most important competencies in order to be successful in your area of expertise? What role has the CFA charter had in your career development?

At the Bank, a Master’s degree is a minimum requirement and many have PhD’s. It’s necessary to have a deep understanding of economics and finance. I would also emphasize building up one’s network; focusing on creating strong bonds will lead to those opportunities that I mentioned earlier. Gradually building a strong network of contacts is a key success factor.

While working at the Caisse de dépôt, my boss suggested I look into the CFA designation. At first, I was not keen and told her that I would only try once. Ironically I passed each exam on the first try! I didn’t do the CFA to learn how to compute ratios; I was already too old for that, but to be able to have an in depth dialogue with market participants. Being on the Bank’s own pension fund investment committee and interacting with portfolio managers, it gave me the knowledge that I needed to ask better questions and to challenge these individuals.

How do you perceive the career opportunities in your sector? What advice would you give to a person who’s beginning a career in this sector?

There are 20-30 CFA’s working at the Bank of Canada in Ottawa. Following the 2008 financial crisis, regulations are becoming more complex and as the oversight of the financial industry is becoming more important, I see more opportunities for CFA’s in the regulatory field. Whether it is at government agencies or in the private sector, compliance and regulations are looking for more experienced and qualified professionals. So the best advice I can give any CFA charter holder is to broaden your horizons when it comes to you career. Think in less traditional terms when reflecting on your career and what you want to do. Often times we don’t realize how certain experiences will be usefulfurther on in our careers.