Published 06 March at 10:00AM, inCAREER INTERVIEWS 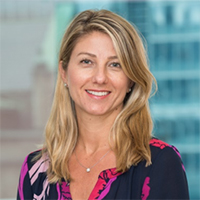 Born into a family of academics from the Ottawa area, Anik Lanthier left the nation's capital to pursue actuarial studies at Université Laval in Quebec City. After completing a bachelor's degree in business administration (BBA), Anik found herself drawn to public service. She initially considered a master's degree in health services administration to combine her passion for business with her desire to make a difference in people's lives. After some hesitation, she eventually opted for a master's degree in finance (MSc) and subsequently landed a job at the Bank of Canada following a campus recruitment session at the university.

Building on the training she received in the CFA program, Anik developed a keen interest in investment and asset management. She left the Bank of Canada to pursue an opportunity related to the equity market within Hydro-Québec's pension fund. In her role as manager of external mandates, she innovated by launching a hedge fund program in the early 2000s. Anik then made the leap to PSP Investments in May 2006, where she quickly climbed the ladder to become Senior Vice President, Public Markets and Absolute Return Strategies. 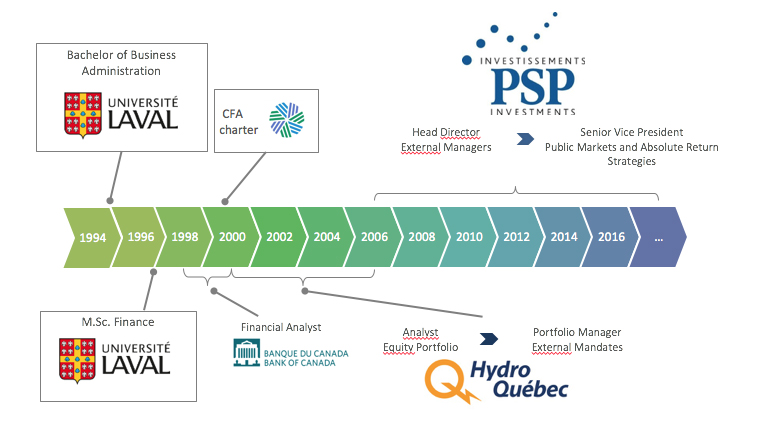 When did you begin your career, and what was your first job? Was it the position you were hoping for?

I officially began my career at the Bank of Canada in 1997. The rather academic vocation of the institution immediately appealed to me and was connected with the environment in which I grew up. Although most of my analytical work focused on the fixed income sector, I quickly became involved in a project to establish a large public service pension fund, better known today as PSP Investments. I had no idea at the time I would end up working there a few years later.

Did you follow a specific career plan? How often have you changed employers or jobs within the same firm? What was the main reason for those changes?

Although I didn't have a specific career plan, I had a good idea of what I was looking for. I wanted to work in the field of asset management for a major performance-oriented company. PSP Investments seemed to be the ideal place to meet these criteria—not that I was looking to leave Hydro-Québec. On the contrary, I was learning and enjoying it there very much. But I had this strong desire to be part of PSP's growth story. Moving up the ladder came with more responsibility, but also the privilege of being able to continue to innovate and use my creativity.

Tell us more about the position you currently hold. Did you encounter any major obstacles in your career path? What do you enjoy most about your job?

I currently lead a great team of 80 people who manage an extensive portfolio of approximately $68 billion consisting of equities that are actively or passively managed in-house, internal absolute return strategies, external equity portfolios and hedge funds. In addition, I oversee the negotiation of all asset classes in the organization.

As far as the challenges I’ve faced, the last financial crisis in 2008 was unquestionably one of the biggest. But twice in my career, I’ve also encountered what can be a somewhat delicate situation on a human level: becoming the boss of my colleagues. While maintaining a certain collegiality, I had to establish my credibility and mobilize the team and resources towards a common goal.

What excites me most about my job at PSP is the enormous potential for innovation. It’s a privilege to work with and meet such intelligent, talented people, test concepts and become a pioneer in certain strategies.

What skills do you believe someone needs in order to succeed in your area of expertise? What sort of impact has the CFA® charter had on your career path?

Of course, you must be passionate and have a great deal of intellectual curiosity, but more importantly intellectual flexibility. Being aware that you’re not always the smartest person in the room and being humble are key to recovering from mistakes and knowing when to let others take the initiative. You need to understand your strengths and those of others to successfully mobilize your team towards a common goal. These personality traits will also help you make decisions when the time comes.

I strongly urge people to get their CFA charter quickly in their careers to establish their credibility and round out their investment knowledge.

How do you view the career possibilities in your sector? What recommendations would you have for someone setting out in this field, particularly young women considering this profession?

Our industry is currently undergoing enormous change, not only at the regulatory level, but especially from a technological point of view with the rise of artificial intelligence. When the best chess player in the world can be beaten by a machine, I fully expect similar advances in finance. However, I’m very optimistic about career prospects in our sector. I believe finance professionals will continue to play an important role in concert with these innovations and changes.

I often give the same advice, regardless of a candidate's gender or ethnic origin: make sure you build your technological skills alongside your expertise in investment. It’s also very important to develop your communication and leadership talents, especially if you want to rise to management positions.

How do you think the investment industry could increase gender diversity?

It’s human nature to hire someone who’s like you, regardless of your gender. We need to make an effort to look for and attract more atypical profiles. More women and minorities will be hired as the number of women and minorities holding important positions in finance increases. It's a rotating wheel, and if a certain momentum sets in, diversity will grow exponentially.

It’s also important to have real gender diversity. We need to put forward true female role models—mothers who are able to stand out in the workplace while being engaged and invested in their personal and family lives.