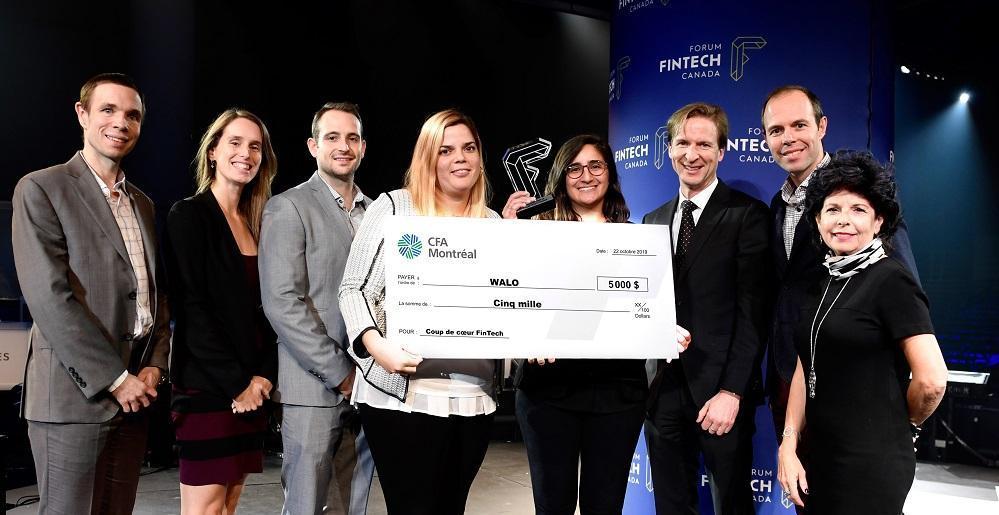 Montréal, October 22, 2019 - This afternoon, CFA Montréal, the association of chartered financial analysts, presented its FinTech Coup de Coeur prize to the start-up WALO. The $5,000 prize is awarded as part of Finance Montréal’s 2019 Canada FinTech Forum, which runs until tomorrow at Palais des congrès de Montréal. WALO stood out among the 97 candidates evaluated by the jury, which was composed of members of CFA Montréal's FinTech committee.

“WALO has distinguished itself by the originality and quality of the pedagogical approach of its app, which intersects with CFA Montréal's financial education mission, particularly among young people and their parents,” said the President of CFA Montréal, Carl Robert, CFA. Technology is ubiquitous in the lives of young people and increasingly in the financial sector; this is why FinTech is one of our association’s key priorities.”

Rim Charkani, CEO of WALO, stated that she was honoured to receive CFA Montréal's FinTech Coup de Coeur prize as it recognizes the relevance of her team's work. “When you know that 43% of Quebecers are  $200 or less away from financial insolvency at month-end and that 58% of them don't feel like they will be able to cover their family and living expenses without going into further debt, it is time to prepare the next generation to deal effectively with financial reality. Several studies show that children who have been exposed to financial literacy are three times more likely to spend less, to save more and to avoid over-indebtedness.”

Founded in Québec City in 2018, WALO's mission is to educate young people on the importance of sound financial management through financial literacy tools specifically designed and adapted for them. The WALO app and the WALO prepaid card that transform pocket money into practical life lessons will soon be available on the App Store and Google Play sites. WALO is part of the start‑up incubators in residence of Desjardins, Fintech Cadence and Québec International’s LE CAMP. For further information, see walo.app.

In addition to the FinTech Coup de Coeur prize, CFA Montréal is presenting a dinner-conference this evening, at which the President and CEO of the CFA Institute will speak on-stage with Bloomberg Chair Peter Grauer. CFA Montréal will also hold its annual event, Rendez-vous FinTech, next spring.

Founded in 1950, CFA Montréal is part of the worldwide network of member associations of the CFA Institute. As global investment leaders, these associations promote the highest standards of ethics, training and professional excellence for the ultimate benefit of society. CFA Montréal represents the interests of more than 2,700 investment professionals through awareness, training, event organization and professional development.

The CFA Institute, the world association of investment professionals, sets standards for professional excellence and credentials. The organization promotes ethical behaviour in investment markets and is recognized as a valuable source of knowledge in the global financial community. The CFA Institute is made up of more than 168,000 investment experts in 164 markFor more information, visit cfamontreal.org and cfainstitute.org.

Spotlight on the COVID-19 crisis with Jean Boivin